I love the new Rainbow Scrap Challenge button for 2019 - "Using your scraps, one color at a time!"   I've been participating in the RSC since 2016, and have enjoyed every minute of these days, weeks, and months spent sewing with my rainbow of scraps.  Just like everyone else, I've completed some wonderful quilts, ended up with more than one WiP still needing to be finished, and piled up multiple orphan blocks.  I also have met many special quilt blogger friends and gotten tons of ideas and inspiration from all of the participants!

I wrote in my 2019 Planning Party post, that the first part of this year would be devoted to some finishing, and I'm on track with that.  Squared Away, the 2018 RSC Sampler project is ready to be layered and basted, and I'm determined that will happen this week! 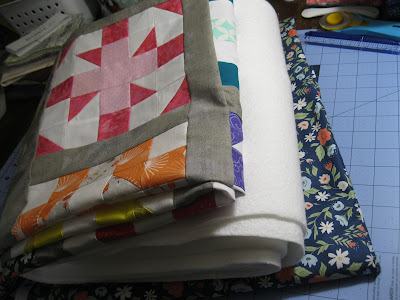 Meanwhile, though, a scrappy quilter has just got to play with scraps, so I've also been doing some of that this week!  My ongoing leader-ender project left off with these 15 blocks made last year. 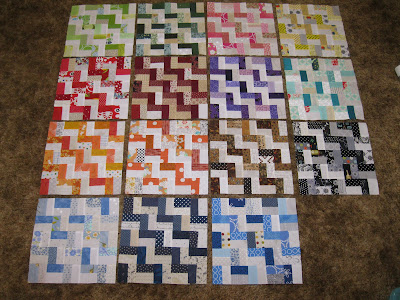 There are already two red blocks (the RSC color for January this year), a bright red and a dark red, but of course I was looking through the red scrap bin and thought...since I need at least 30 of these to make a good sized quilt...

What about a Christmas red block - adding in black, white, and a smidge of green? 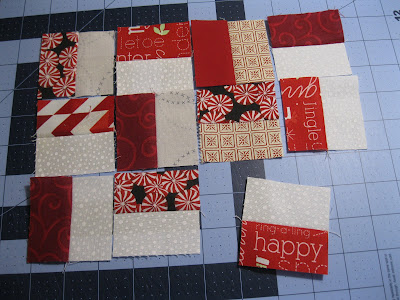 This one will definitely be "happy!"

I also started sewing some rectangular string blocks last week, and continued that this week, ending up with a set of four in lighter reds with more white/cream backgrounds, 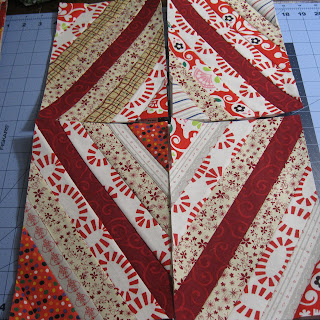 and a set of four with less of the light backgrounds. 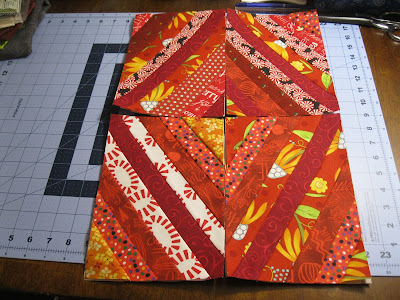 And while I was at it, why not sew up one of the Tiny Tuesday blocks that Angela posted this week, since it was a string block, too?! 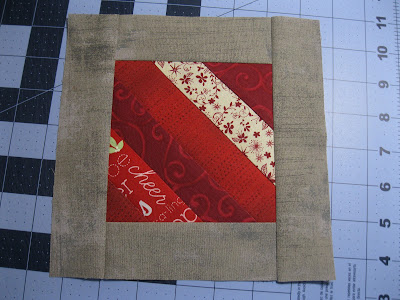 Can you tell I've been sewing with the same scraps all week?
They're still not used up - how does that happen? :)

Hope you've enjoyed some scrappy sewing this week!  I'll be joining in with all of the Rainbow Scrap Challenge quilters at SoScrappy for ScrapHappy Saturday!

well that is one way to use up the scraps isn't it - I should cut up a lot of mine and do something too but I have so many going on right now I don't know if I want to start one more thing!!

I spent last year finishing up previous years' projects - so this year I can start "clean" -- good luck to you on your finishing. The Tiny Tuesday project is intriguing to me.

Oh love the reds - and that one with the oranges - on Fire!!!

I need to start some more string blocks-they are my favorite. I do like the tiny Tuesday block, too! Enjoy! mary

Those string blocks are so fun. You've got a great start on your scrappy sewing for 2019.

Those logs on the leader and enders are so tempting! Great use of all your red scraps so far. I keep forgetting about the challenge quilt blocks from last year....

I'm tempted to join RSC this year because your escapades in it are so interesting to me. Love the red strings; and the Christmas red block - yes on red with a smidge of green!

Wow, you have a lot of reds, and so many projects on the go, I'm impressed.

I really like the diagonal string blocks. Such. Nice variation on a theme. Enjoy the finishing! Looking forward to seeing squared away all done.

Same bits in lots of projects? Sounds like a recipe for using up ALL the scraps!! :o))

I keep thinking maybe I need to do this challenge. I might have to wait and see how swamped I am from all the other ones I am doing! LOL. You are killing it for sure this month.

I can't wait to start sewing with my red scraps. I love all of your happy blocks!

Oh, I love that you just did MORE of those rectangle string blocks! They are yummy. And I so understand how the scraps keep on going and going, hence the reason so many of us make lots of different blocks each month. Just can’t keep a good scrappy quilter down!!

You've got some really fun blocks here! I've been admiring your little rails leader/enders since last year - love your Christmas Red one! And those rectangular strings are gorgeous!

I like those rectangular string blocks and that you are making the lighter and dark versions. That will make for an interesting quilt.