My last To-Do Tuesday post was a couple weeks ago, and in between I had to abandon any expectation of "getting things done" and just be available for my mom after her fall and while she was in the hospital and transitioning into the rehab center.

Finding some mental health *me* time was important, too, though, and when I was able to get back to the sewing room, I chose nothing from my previous to-do list!  (wink!)  Instead I worked on finishing up a little squirrel project that I started over a year ago.   It deserves its own post, and that will come later in the week, but here's a peek at the back. 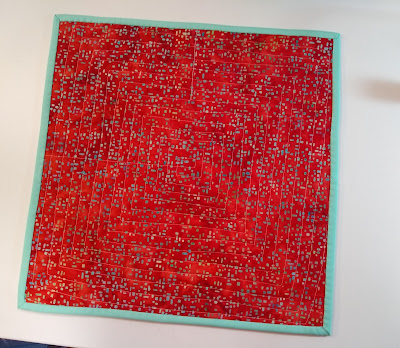 Finishing a little something was a big boost!
Along the way, I did get a few other things accomplished:
The one thing I've barely touched in the last two weeks is the Positivity quilt project, although it has moved along a bit.  Here's where I am on that one right now: 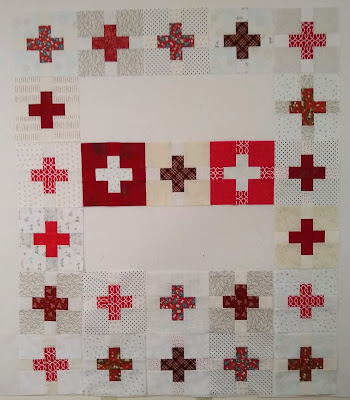 The open spaces are going to be filled with the red reverse blocks.
Thanks go to Vicki for helping me with that idea!
Although still in the rehab center, my mom is doing quite a bit better, so I think I can comfortably make myself a list this week! 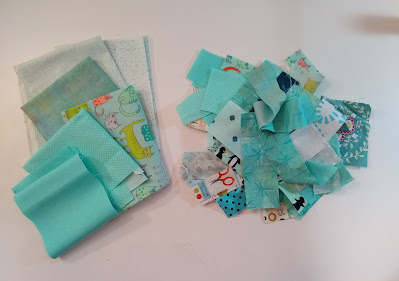 Have a great week!  I'll link up with ToDo Tuesday when I figure out where it's being hosted.

your projects look great - I hope your mom does get much better soon - for her and you!

I'm glad your Mom is out of the hospital and hope that rehab is something she will tolerate well. Your "old" squirrel sure has a pretty back and some neat quilting. Looking forward to your plus quilt progress!

I’m interested too, in seeing your squirrel! I see red and an aqua binding, now I am curios. So glad your mom is improving! Hopeful she’ll be back in her own space and feeling stronger soon.
I think the reverse blocks in the center is a fabulous idea! It’s a great color combination!
Have a good week. If you discover who is hosting To-Do Tuesday, let me know! Have a good week!

Any idea how long your mother will be in rehab? It would be nice to get her back to her own home again but all in good time, of course. Your Positivity quilt is really pretty and I'm looking forward to seeing your finished "squirrel".

Glad to know your mother is better and improving well.
Looking forward for seeing your pluss quilt top and the front of the little squirrel.
Have a good week, Diann!!

looking forward to your reveal! the positivity blocks are looking great! and a fun setting...wished I had joined in! Have fun with your teals/aquas.

Glad to hear good news about your mom, and thankful that you found time for some sewing therapy! Can't wait to see the reveal of that quilt!

Hooray for a mental health squirrel project, Diann! Looking forward to seeing that (and your completed Positivity quilt top) in the days (and weeks) to come.

You've done well with your projects despite the interruption in your routine. Happy to hear your mother is improving and hope she is able to return to her apt.
Pat

Hope your mom is healing well. Mental health time is so important and squirrels are a perfect treatment. Doing a little of that myself these days!

Glad to hear your mom is doing better. Looking forward to seeing your little finish! Glad I could help you out with an idea!! Hope your week goes well:)

Must be a relief to learn that your mom is doing better. Sending best wishes for her speedy recovery. The Positivity quilt is coming along beautifully. Love the reds. I am sure you will have it done before August 22, when the linky party opens.

Sounds like you've had a tense week. Good to hear your mother is doing better, falls are so scary when it's your parents. It's good you were able to work in some sanity maintenance while she was in the hospital. The Positively project is coming along beautifully. I like the swich from light to dark backgrounds in the center blocks.