Last Saturday Mike and I celebrated our 45th anniversary!  It's always hard to believe another year has gone by - and hasn't this been quite the year?!  It's a good thing we like spending a lot of time together... 😉 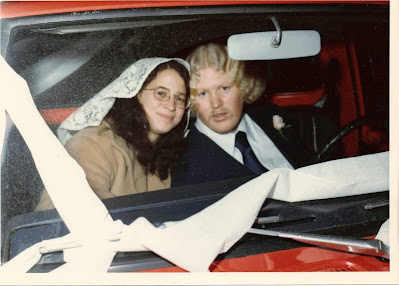 We celebrated with takeout from a nearby Chinese restaurant.  It was yummy and we had enough for three meals!  Our meal filled this box! 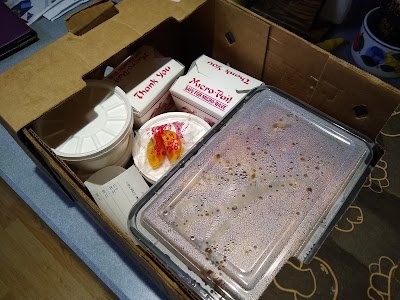 We enjoyed the new Masterpiece show on PBS - "All Creatures Great and Small."  It's on Sunday nights.  I read a lot of those books many years ago, and watched the original series as well.  It looks like this version will be just as good! 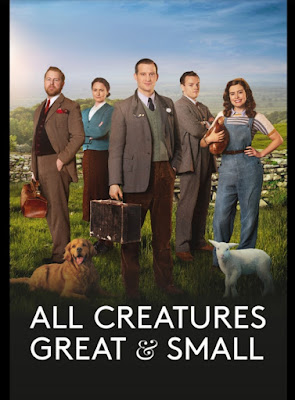 You know it's going to be a good day when you *finally* get this note from the USPS. 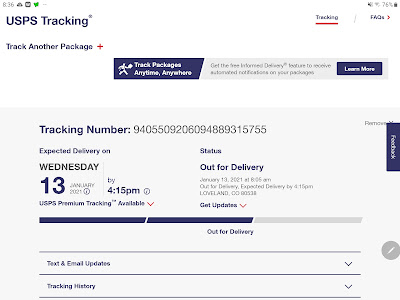 This was the fabric I ordered from Bernie's shop on December 28th that she shipped the same day I ordered it.  It got as far as Denver (50 miles away) on Dec 31st and has sat in their distribution center ever since!  Last week I submitted a complaint form and actually got a phone call from someone at my local post office who was investigating my claim.  (A real person called me - that was really surprising!)
And this afternoon (Wednesday) my package arrived!  Whoop, whoop! 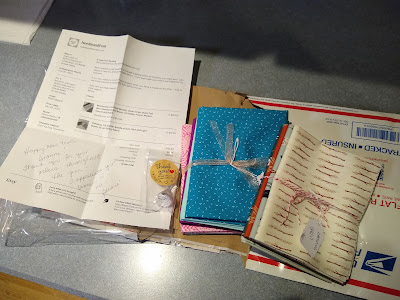 There are two bundles of fabric - one is half yards and the other is fat quarters.  I have plans for the half yard bundle, so now I can get going on that project.  More about that later!
Over the weekend I roasted a pork tenderloin, and had lots of leftover meat to do something with.  So I googled a soup recipe and found this one:  Pork and Potato Soup.  I made this recipe last night and it is very tasty! 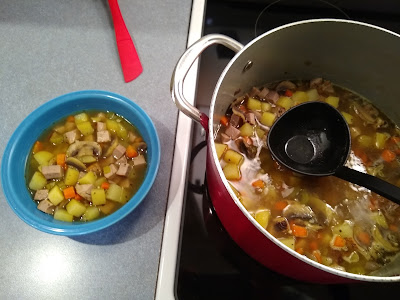 It's a pretty basic vegetable soup with a few added spices and the pork itself giving it a unique flavor.  We enjoyed trying something new and different!
Hope you've had a good week.  I'm joining in with LeeAnna and friends at Not Afraid of Color for "I Like Thursday!"

Happy Anniversary! We got married in November 1975

Happy Anniversary - got you beat by a couple years. That is enough Chinese for awhile isn't it - I love it. Great news on your package- I was having problems in the summer with packages that would end up at a place called Grapevine Texas and would sit for weeks - I tried placing inquiries and no one would ever get back to me - I would complain to no avail - one time the package finally arrived almost 6 weeks after the order and the box was barely held together with one piece of tape. This past year I have had 3 packages that never arrived

Happy Anniversary Diann! I love that picture of you and Mike. You got married 7 years after we did - you are still youngsters.
We watched All Creatures and I'm hesitant to give it a thumbs-up just yet. I'm spoiled to the old series and still love the richness those actors gave to the characters. But I need to be more open. ;)
So glad you finally got your fabric!

Happy Anniversary! I got married in 1976 too! I love Masterpiece, and am watching All Creatures too.

Happy Anniversary :). Hubby and I would have celebrated 27 yrs this past Boxing Day and his 82nd birthday today.
I ordered a Christmas gift online in early Dec. and watched it go from Washington state to Nashville, Tn. then to Mississippi and finally to Michigan -- talk about taking the scenic route. Thankfully, it still arrived before I had to wrap and ship it to Tx. And I had another pkg (for myself) that spent about a week in the Indianapolis sorting center -- and the Christmas card I sent one of our grandsons in Mn. came back as 'undeliverable' - took it back to our post office & told them that he does indeed live at that address so they shipped it off again - hasn't come back to me - YET.
I've tried watching All Creatures great and small on Britbox, but the older vet just gets on my nerves lol.

Happy Anniversary! The years do fly by, don't they? Sounds like you celebrated well with tasty food! We watched the All Things episode too, and agree that it looks to be a good show. We are waiting for a winter storm to arrive, so I'll be in my sewing room soon.

Happy anniversary, Diann!! That soup looks really good, so thanks for the link. We always have pork leftovers when we grill a tenderloin. About how much meat did you add to the soup?

Hi,
Happy Anniversary, love the pictures and love Chinese food. I haven't see All Creatures Great & Small, but it's on my to watch list...if I can find someone that is streaming it. Glad to hear you finally got your order. Wow, that was a long wait. Your soup sounds yummy. I make vegetable soup with Pork neck bones...it really is good. Have a great day!

Congratulations! So glad to see you're still hanging in there together. I sure hope that parcel delivery and mail will improve shortly. There sometimes doesn't seem to be any rhyme or reason for the delays, either. Take care.

Happy Anniversary! Hubs and I celebrated out 44th Dec 23rd with Chinese take out and a movie. I hope you two have a wonderful year!

Happy anniversary! What a great picture! As for packages, I sent my daughter in Maine a Christmas present on December 14 and it got there yesterday. At least it wasn't cookies! Enjoy that Chinese (again)!

Hi Diann! Happy 45th wedding anniversary. That's a milestone! All Creatures Great & Small - oh, how I loved those books and the old series, too. I will have to look for the new updated one! YIPPEE! Your fabric arrived. I'm so glad you filed the complaint and so surprised and amazed that a real person followed up and called you. WOW! The soup looks yummy. ~smile~ Roseanne

Happy Anniversary. I binge watched the original All Creatures (the old one) years ago. I bet the books are better than the show. But then British adaptations seem to be closer to the books than American ones.

Happy anniversary! I hope your new year together will be the best yet!
My Hubby and I got married in April 1976, so we aren't too far behind you. :)

Happy anniversary! We haven't started watching All Creatures. Did you ever watch the original? So much fun. I can't wait to try this one out. Yay for finally getting your fabric. Wowza that was lost!

Happy Anniversary my friend!! It really is amazing how a year flys by, even a covid year. Crazy how long your fabric order took to get to you. I ordered prescriptions and I was amazed how quickly they came, almost before I blinked my eyes!

Happy Anniversary! 45 years is a milestone for sure! Chinese takeout sounds like a great celebratory dinner!
Glad your fabric arrived, looking forward to your project!

Congratulations - 45 is certainly a milestone! We are a year and a half behind you. Your post made me think that about how my husband and I had $35 to spend on our entire week's honeymoon. Good thing we had the use of a family cabin in the woods. Bought groceries and splurged on renting a canoe and paddle boat at the lake. Good times!
Have a good week!

Forty-five years is something to be proud of. Congratulations