A Trip Through My Sewing Week

I've been all over the place with my sewing this week and put a lot of miles on my trusty Pfaff!  The ultimate goal was to finish up the dark blue zigzag row, and I reached that destination yesterday afternoon. 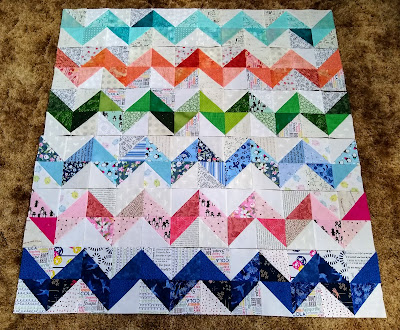 But there definitely were detours along the way, including three red, white, and (dark) blue stars for Covered in Love.  I'll get these sent off early next week.

I've made a few of Bonnie Hunter's Easy Breezy Leader/Ender blocks in the 6 inch size, and mentioned to Deb A that I thought a star block might go well with these.  When she suggested Wonky Stars, I decided to turn down that road and make a few of those just for fun. 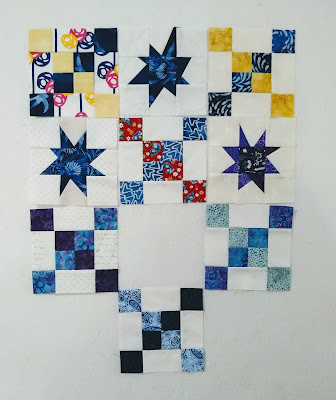 These are all made with the leftover bits that have ended up on my cutting table from other projects - lots of blue, but some red, yellow, and purple, too.
Continuing on the wonky path, I made some wonky X (or plus) blocks inspired by Joy, and when LeeAnna suggested pairing them with some O's ( to make X's and O's), I added a wonky one of those just to see what would happen. 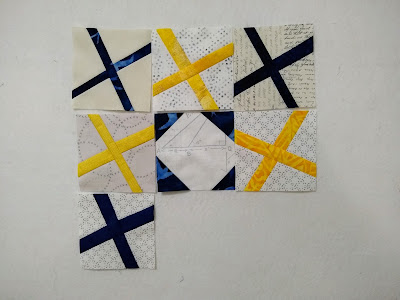 Just one made so far, but that could work!
Thinking ahead to the next quilt top I would like to finish, I ordered some yardage for a backing from Bernie at Needle and Foot, and it arrived Thursday.  I think this will be perfect for the Tiny Rails quilt! 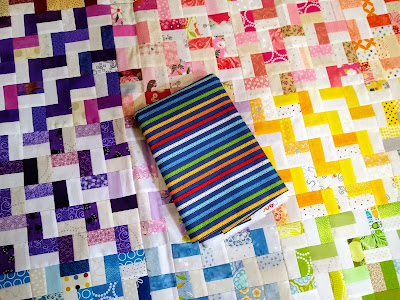 Looks like a lot of friends have come along for the ride this week - thanks for all the ideas!  Sharing at SoScrappy for ScrapHappy Saturday.
Posted by LIttle Penguin Quilts at 9:34 PM

You have been having a blast with your sewing this week! You got so many things done this week! Love that backing for the tiny rail quilt!! How tiny are your rails? I forgot (heat/pandemic/ brain fatigue these days). I love the look of that quilt. I love the O with the X's!! It's perfect! Love the leaders and enders piece you are working on! Have a great day!!!

It's always fun to see where your trusty Pfaff has been every week!

You are really staying on track with your pretty projects, even with the "detours". ;) I love the zig-zag blocks, and that backing fabric for your tiny rails is going to look great!

Love the wonky stars with the leader and enders! The X and O's are cute as well. Still loving the zig zag quilt. Just a few more colors to go.

You have made a delightful selection of RSC blocks. Your Wonky stars look great with the Leader/ender blocks. I love your backing choice for your Tiny Rails quilt.

nice wwork - everything looks so nice

I love chain blocks in any design and your zig zag quilt looks so lovely!! How many more rows will you add to it, Diann ? Have a safe week.

oooo that zig zag is pretty! I like the wonky stars a lot with the leader ender blocks too. Hugs and kisses is working very well... so much done. Pffafffffffs are trustworthy!
LeeAnna

Those stars do look good with the leaders and enders. And the zigzags are coming right along! Have a happy Saturday!

Love, love, LOVE those Wonky Stars in Dark BLUE mixed with your Easy Breezy blocks!! The Wonky "O" works well with your Wonky "X" blocks, too. It looks like you've been having SEW much fun!

I keep forgetting to post my recent order from Bernie! Love those fabrics, especially the rainbow tape fabric. All of your quilts in progress are fun. Love the wonky stars!

You've really been churning out the quilt projects. That zigzag quilt is going to be really cute. I like to use stripes, like your backing for tiny rails, for binding kids' quilts. I've got two sawtooth star blocks done for CiL and want to make two Ohio Star blocks to send as well.
Pat

Oh, goodness...You certainly were busy! Impressive! I do like the L/E with the Wonky Stars. I rarely think of using alternate blocks.

I still ❤️ your zig zag quilt!
The wonky stars look great with your Easy Breezy blocks. I started with the smaller size. I’m going to try making some 4.5 “ wonky stars and see what happens! I might drive myself crazy!

You've gone all wonky on us!! LOL. Cute projects all.

You've got all sorts of goodness going on! I love those wonky stars with the L/E blocks! And you already know I'm crazy about those zigzags!

Love your 'zigzag' quilt, very effective! You certainly got a lot done, a little bit here & there gets thing done eventually, love those wonky stars too!

Looks like you had lots of scrappy fun this week! The zigzag quilt is delightful - it makes me smile. Also, Yay for stars!

Those wonky stars really play well with your L/E. Love the zig zag quilt too. Lots of progress this week. Well done! ;^)

Ooh, la la! You are full of inspiration this week!

I LOVE the backing you found ... perfect for Tiny Rails! Of course, every week I must tell you how much I love the Zig Zags too

Wonky Xs and Os! What a great idea :)

I came here for all things bright and beautiful and I was not disappointed :-)
If you can save some of the striped fabric for binding.

Love your red, white and blue star blocks. Lots of fun stitching stuff in your sewing room this week!