When I broke my wrist back in April, and had to slowly get back into sewing again, I had to decide what to focus on and what to let go.  Ultimately, I ended up trying to stay current on my Rainbow Scrap Challenge blocks, plus a couple of gifts I had been working on.

What I ended up letting go of was my Quilty 365 project.  I had been making orange peel blocks for that project since December 1, 2015, and I think I was up to about 180 of them!  It was an interesting project, but even when all my body parts were in tact I had a hard time keeping up with making a block a day.

So, since April they've been sitting there, nagging at me. "What are you going to do with us?"  It has taken me almost four months to decide.

The other day I got out all of my orange peel blocks. 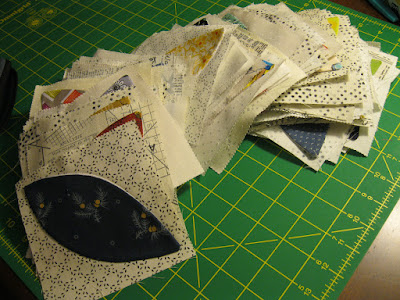 It was fun to sort through them and remember why I had made each particular block. 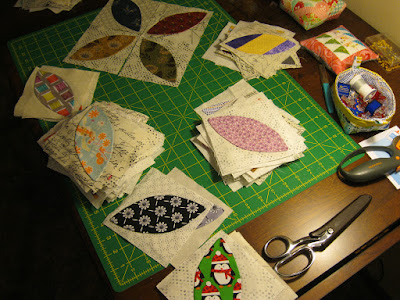 I made piles of them - holiday blocks, favorite colors, favorite fabrics, pieces from projects I had been working on.  And made a decision.

One of my piles turned into the blocks that are most meaningful to my husband and me.  We love wine tasting and coffee dates. 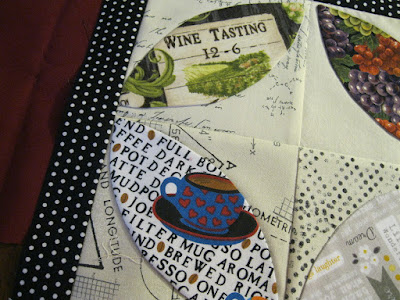 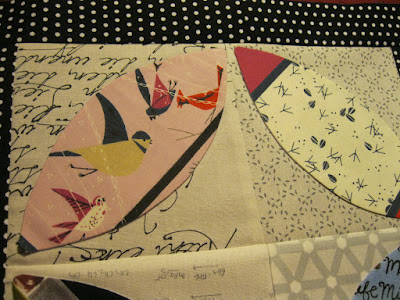 We are supremely entertained by the squirrels in our yard, even though my husband spends hours trying to keep them out of our bird feeders.  "Squirrel wars," I call it!  The little bit of red heart fabric tells that we celebrated our 40th wedding anniversary this year! 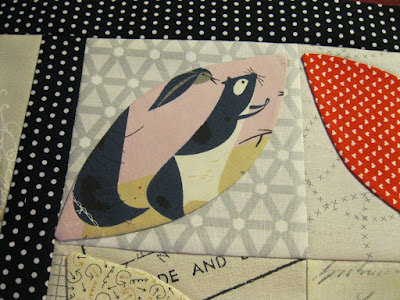 And best of all, last December my husband got the All Clear from his oncologist, and we said goodbye to him, hoping never to return! 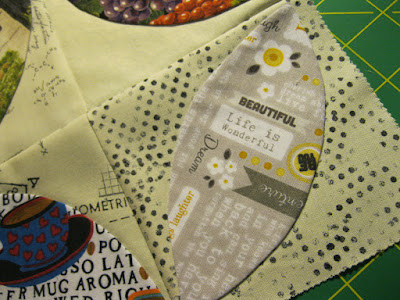 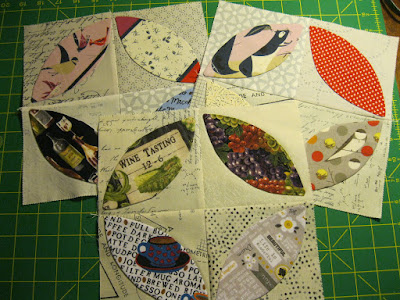 and have put those together with some black polka dots for a border and sashing to make a special table runner, just for us.  I might add another border of my leftover Kona Crimson. 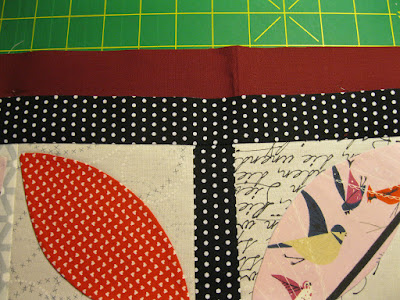 Next step - batting, backing, and quilting it - coming right up.

As for the other orange peels, I'm thinking they could become mug rugs or pincushions.  I think there might even be enough fun orange peels to make a quilt for a child that I could donate.  Many of them were fabrics I had worked with that day, leftover blocks from a project, or orphan charm squares - not as meaningful to me as some that I made - so I won't mind not having them in a project I would keep for myself.  I think all of this will satisfy me just as much as the 365 orange peels sewn together that I had originally planned.

It's hard to abandon a project, but it's not the first one!  I have other WiPs and plans for quilts that inspire me more, so on I go!

Linking up to Oh Scrap! at Quilting is More Fun than Housework for Sunday's scrappy inspiration!

Your applique looks great, I cannot get a smooth edge like that. Good plan for using up the rest that aren't as meaningful, there is always a need for quilts!

Sometimes it's necessary to stop trying to move forward with a project and just finish off what you have. I think it was very smart to pull out your favorite blocks, and it will be a lovely reminder of the 365 project.

Memories! Sorting the blocks to favorites, sentimental and not favorites is a great idea!

A personally meaningful mini is SEW much better than slogging along just because you started the 365 Challenge. Way to know yourself and admit that you were no longer feeling the love for that massive project!!

Kudos to you for the forward progress in making it meaningful!

Hi! I think it was good decision to make something with your favourite blocks! You will enjoy that table runner. There are so many lovely fabrics! x Teje

Your orange peels are so lovely. thanks for sharing the meaning behind some of them. It was interesting and most of all, I've learned a little bit about you. Congrats on 40 years of marriage! Congrats on this beautiful table runner flimsy. Love the black border. Looks so awesome. Great job! ;^)

It is hard to get caught back up with a project once you fall behind. I think you did a great job keeping the project meaningful and making something pretty. Thanks for sharing with Oh Scrap!

I dropped the ball on my Quilty 365 orange peels, too. I'm glad you found such a lovely solution to your dilemma!

Lovely to hear the meanings behind your orange peels and you will treasure that table runner. It's going to look awesome. It was nice visiting.

Your orange peel blocks are so neatly done - impressive. Thanks for sharing the meaning behind so many of them. That will be a very special table runner for you, and your idea to donate to others is admirable.

I love these orange peel blocks, and how lovely to make such a meaningful table runner with them. And they look great with the b&w spots too!