I've never thought of myself as a big fan of the color pink, but I sure am having fun sewing with it this month!

When the new Tiny Tuesday block post showed up the other day, there just happened to be a pile of little pink bits and pieces on my cutting table. 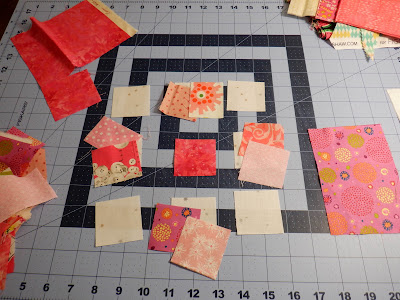 It was so much fun to turn them into this adorable wonky star!  Thanks, Angela, for a great block idea and tutorial! 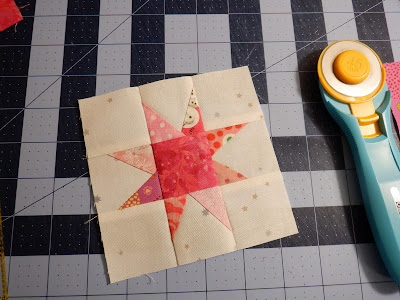 When I turned the star on point and added its gray sashing, it became a star burst! 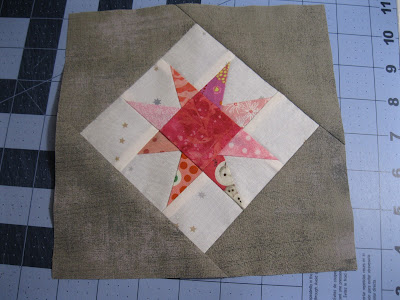 This photo is taken with my old camera - it reads the pink more like I see it.

I had a chance to put all the blocks up on the wall yesterday, and they're starting to look like something! 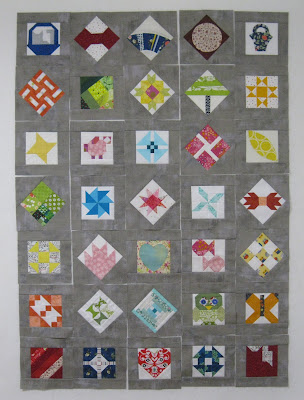 I also pieced my pink string blocks this week. 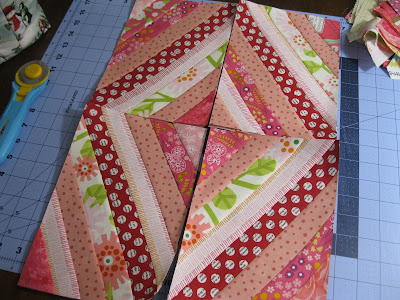 I really like the bits of green that pop out from that one fabric!  I could see a whole quilt out of these pink and green strings, I think.

Here are all the string blocks so far, too. 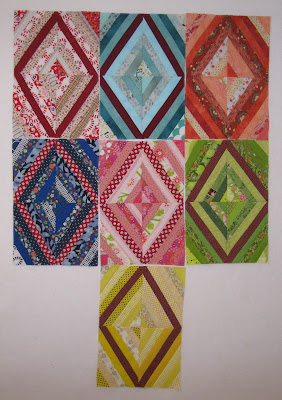 I'm not quite sure where this one is headed yet,
but I definitely love the diamond shapes that are forming.
I'll have to do some more thinking about
how I want to put the quilt top together.

Other pink sewing has been going on in between these two projects,  but I didn't get pictures of them yet.  Maybe I'll squeeze them in to next week's post even though we will have moved onto a new color for August.  Hard to believe I'm typing the word August already - yikes!  The weeks and months fly by, don't they?!

Linking up with Soscrappy for ScrapHappy Saturday.  Check out all the pink posts over there!

I hadn't realized how many tiny blocks you have made-so glad you gave us a fun pic of them all together! And that pink string block wow it is gorgeous.

Your sampler quilt is so fun... you are doing a great job of keeping up with the blocks!
And your diamonds are sparkly!

I like how that little touch of yellowy green makes the pink diamond pop. It's a lovely choice!

Your pink diamonds look great .. Liz Taylor would be proud of you! Lol!

I love that little pink star! It looks so different on point, doesn't it? Like it was very tricky to make :)

Love the pink fun going on in your studio! Those wonky stars get me every time -- I love them, but I've never made one. It is on my list, though! Your pink string blocks are pretty!

Great job on your wonky star!!

Everything looks so nice, cutest little star and your string blocks are great, are you paper piecing these? I'd like to make some but don't want to paper piece, which seems to be what most are doing, just wondering how well it works without paper.

Love your pink starburst block, the blocks all look good on the wall.

Your TT quilt blocks look so wonderful together (I’ve said that before, but they really are so crisp and happy!). And those string rectangles - be still my heart!!

Ooh, I love all your blocks!

Lovely bits of PINK in those blocks, Diann!! What will be the color for August? Only Angela knows...